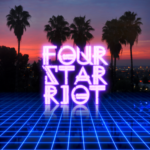 This review is long overdue. I actually received a press release back on August 8th, announcing that these Clearwater, FL natives would  be releasing their new album “Waves” on September 2nd. The delay wasn’t caused by my lack of interest in the album. Au Contraire. Unfortunately, my basement ceiling started “Reigning Down on Me” just as I was getting ready to tap my fingers, on my Mac Mini’s keyboard, to begin my review. I know, reign should be spelled rain, but I couldn’t help throw a little love in the direction of, one of my favorite bands, “The Who”.

After ripping off my basement ceiling’s drywall, our plumber found the source of our water problems. He told my wife, Roslyn, and me that the water line going to our ice maker sprung a leak, and had probably been running for about 4 days. It was a good thing that I was home. Who knows what would have happened if I wasn’t around.

Twenty weeks later, my room is just getting back to normal. I’m still missing about 1/4 of my ceiling, and a 5 foot square of foam under my carpet. However, all of my systems are reconnected, and everything still works.  After being starved for music for quite some time, I am glad to finally report on “Four Star Riot’s” newest album “Waves”.

There are several albums that I’ve purchased over the years that I fell in love with from the moment I lowered my stylus on the record, or pressed play on my CD player.  They include “The Cars’-The Cars”`, “Queen’s-A Day at the Races”, “The Beatles-Abbey Road”, and “The Who’s Quadrophenia”, just to name a few. You can now add “Four Star Riot’s-Waves” to that list.

The album opened up with the title song “Waves”. According to the band, “”Waves” is about wanting more than what you’ve got and sometimes losing sight of what you have along the way.  When you reach the goal or destination you were after, its sometimes not what you thought it would be. Long story short, the grass isn’t always greener on the other side”.

The lead in reminds me of David Bowie’s classic “Fame” but immediately switches to an extremely catchy guitar riff, only to be followed by the hard driving beat of the drums. I just love the vocals on the chorus’

“Empty Space” is my favorite track on the album. The opening bass lines mesmerized me the same way the opening to David Essex’s classic song “Rock On” did back in the 70s. Steve Alex’s vocals and phrasing are perfect.

I think Meghan Trainor was on to something when she said “It’s all about the bass”. The rhythm of the bass on Track 3-“Tell Me” forced me to involuntarily tap my toes for the next  3:47.

Things slowed down a little on “So Far”. The band explained that “So Far is a recollection and fondness for the past, which is now distant.  The protagonist longs for a return to a life that was simpler and care-free. It could be from the viewpoint of an astronaut who’s left earth and yearns for his love, now out of touch.” The song allows Steve Alex’s vocals to shine. I especially liked his voice on the chorus.

The band had this to say-“”Torn and Tattered” was written while waiting out a record-breaking 22 continuous days of storms last August.  But every day we’d have beautiful sunshine too. The weather in Florida is so unpredictable. One minute it’s like a monsoon. The next thing you know it’s calm.  It’s a relationship song that compares the ups and downs to stormy nights that clear the morning after. And the ride cymbal sounds like rain.”

There was no lead in to “Torn and Tattered”. The song just jumped out of my speakers. Once again the bass took control from the opening notes. I also loved how the rhythm guitar filled some of the short breaks from Steve Alex’s singing.

Steve Alex’s vocals took center stage on “Don’t Go” a song about trying to save a relationship.  I really felt the pain in his voice as he pleaded with his lover not to leave.

The band revealed that ““No Shore” is about perseverance. It”s as if we’re swimming for our lives, but the shore is nowhere to be found. Still we keep going; chasing something out of sight, but continuing to press on.”

The bass and the drums create an extremely catchy ,reggae like. opening which continues throughout the entire song. Listen for the crisp sound of the cymbals about 25 seconds into the song. The sound reminds me of the band “The Police’s” classic song “Walking on the Moon”. Steve Alex’s vocals are once again dead on.

On “Baby Blue”, the band uses images from the classic movie “The Wizard of Oz” to detail the plight of someone holding on until a friend can give them the help they need to get back on track, or to find their way back home.  The bass once again establishes the groove, with the help of some great guitar licks, and some catchy drum beats.

“The Horizon” eludes to a band’s struggle to make it in the music business. The drums and guitar create the image of a band working night after night but never getting to touch the horizon. Steve Alex, brilliantly, emotes the frustration of falling just a little short of their expected fame.

The album closes with “Tender Now”, a song that doesn’t possess a single tender moment. It is another hard out of the gate, in your face, angry song  “Tender Now” reveals how constant emotional abuse can end a relationship. The bass and drums vividly display the hurt and anger experienced by the lover who has finally had enough.  I once again shared an emotional bond with Steve Alex’s vocals.

Wow. What can I say. If you’re looking for an album to wake you up and get your heart beating, then look no further than “Four Star Riot’s “Waves”. This is my favorite rock album of 2016. I hope that my delayed review will help boost the band’s record sales, and computer downloads. Who knows, if the band can keep this momentum going they might finally reach the horizon, and fame, that they truly deserve. 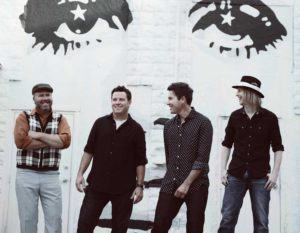 Before finishing my review, “Four Star Riot’s” Steve Alex, and Aaron Aker, were nice enough to answer some additional questions.

What or who inspired you to start playing music?

Mostly 80’s rock bands, but older stuff as well, Beatles, The Faces, T-Rex, Stones, the list could go on for days.

What is the first song you learned how to play, and what was your practice instrument?

Had to have been something in the elementary school band; drums.

On bass, I’m pretty sure it was a Tesla song, or maybe The Cult.

What is your proudest moment as a musician?

Today, to be able to sustain this band for so many years and to still be working at a high level. Our first album was recorded in 2002. To have a song from that album make it into a successful film earlier this year was pretty surreal. But we’ve had a lot of proud moments over the years including the opportunities to open for some very well-known bands and play a bunch of really cool festivals.

Yeah, just being able to still be doing it after many many years, and making music that we are proud of, and doing it our own way.

Who do you listen to, and why?

What kind of audio system are you using to listen to music?

The following questions were answered by the band:

What is your ultimate goal as a band?

What challenges have you faced that have prevented you from reaching this goal?

Promoting our new record and a few new videos.

How do you go about writing a song? What is your creative process?

We start with someone’s idea or riff, and then see where that takes us, and after the music comes together, then spend some time making it all flow as a song.